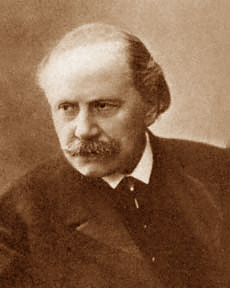 Jules Massenet (1842-1912), a French composer, composed "Meditation" from Thaïs in 1894. Massenet was one of the most prominent French composers of opera in the late 19th and early 20th centuries. He studied music at the Paris Conservatoire, and in 1863, was the winner of the prestigious Prix de Rome. Winning this award enabled Massenet to study in Italy for two years, and he met the composer Franz Liszt while there (Liszt introduced Massenet to his future wife). When Massenet returned to Paris, he was commissioned to compose an opera for Opéra-Comique, and from this point on, he commenced a successful career as a composer. Massenet soon joined with other young composers who shared his musical views, and he became part of a group called the National Society for French Music, a coalition formed to support French composers and promote French music. In addition to writing operas, Massenet composed orchestral suites, incidental music for plays, ballet music, and choral works such as oratorios, cantatas, and sacred and secular songs.

Massenet participated in Pauline Viardot's music salon concerts, and considered her a close friend. Pauline Viardot promoted and sang the leading role in his oratorio Marie-Magdeleine. This piece, along with another oratorio (Eve) and some orchestral pieces, led to Massenet being awarded France's prestigious Légion d'honneur in 1876. In 1878, he began teaching composition at the Paris Conservatoire. [34] In the late 1870s, Massenet's operas began attracting international fame, and he soon was regarded as one of the most illustrious French opera composers of his day. His operas were regularly performed by major operatic companies in cities such as London, Milan, and Vienna, and some of his most popular operas were Manon (1884), Werther (1892), and Thaïs (1894). [35] [36]

Thaïs is based on Anatole France's novel, and tells the story of a young priest who seeks the salvation of a woman of questionable virtue, a courtesan named Thaïs. The piece "Meditation," is a dramatic interlude in the middle of the second act of Massenet's opera. During this interlude, when the curtains close, "Meditation" is played by a solo violin with orchestral accompaniment. The lyrical, expressive melody of this piece symbolizes the inner struggle of Thaïs as she meditates and reflects upon the direction of her life. As the piece progresses, the music's dramatic tension and soaring melody depict a spiritual awakening as Thaïs decides to change her ways and convert to Christianity. The opera Thaïs was premiered in Paris in 1893, but did not achieve measurable success until it was performed in Italy in 1903. From that point on, Thaïs has been a standard and popular part of operatic literature throughout the world. [37]

TECHNIQUE TIPS: The piece "Meditation" is extremely popular as a solo musical number (it is often used as an encore number by concert violinists, and has also been scored for other instruments). Massenet used several musical terms to enhance the expressive performance of this piece. At the beginning of "Meditation," Massenet used the musical expression andante religioso, meaning play in a moderately slow and devotional or religious manner. Molto sostenuto is also indicated at the beginning of the piece, meaning play with a very sustained sound. Tempo variations are used throughout the piece such as rall. (rallentando), indicating gradually become slower and slower; a tempo, meaning return to the original tempo; and variations such as a tempo piu mosso, indicating that a slightly more rapid version of the original tempo should be used. In measure 23, Massenet used the term poco a poco appassionato, meaning little by little, play with passion and intense feeling. He reused a variation of this term beginning in measure 30 with the expressive marking poco piu appassionato, meaning play slightly more passionately and with intense emotion or feeling. Beginning in measure 32, Massenet's expressive marking, piu mosso agitato, means play a little faster and in a slightly agitated manner. In this section, sforzando markings are also found. Sforzando means forced or accented, and is usually attached to a single note or chord. It generally indicates the note should be played loudly with a sudden, accented emphasis, and is indicated by the marking: sfz. Other musical markings in the score include calmato, meaning play calmly. Notice the dynamic markings throughout the piece, and as you follow them, see if they assist you in interpreting the piece musically. Some of these terms include cresc., an abbreviation for crescendo which means gradually become louder (also indicated by the marking

), and dim. or diminuendo, a term which means gradually become softer, and has the same meaning as the musical marking for decrescendo

. When there are tenuto markings _ such as in measures 30-31 or parts of measures 35-36, try to use a full bow and a singing tone. There are many ways to musically express yourself as you play this piece, and you may want to experiment with the balance you like best as you play Massenet's beautiful piece, "Meditation."

*Although this online string class is provided free of charge, all rights are reserved and this content is protected by international copyright law. It is illegal to copy, post or publish this content in any form, and displaying any of this material on other websites, blogs or feeds is prohibited. Permission is given for individual users to print pages and perform music from this website for their personal, noncommercial use.